Merging theory with practice based research led to a residency in The Microbiology Laboratories of Manchester Metropolitan University.

Initial conversations across both the Schools of Art and Science revealed a fundamental difference in process and language. I was looking to explore rather than experiment. My research was question based rather than outcome driven. The Cartesian division isn’t wide enough for a striving multidisciplinary arts practice.

My questions surrounding Pattern and Metta-Pattern (Bateson) – led to a series of tests, with samples taken from various living sources, including my skin. While looking for the connecting patterns, and using different temperatures, agar, and Petri Dishes – I found that radial movement was the connection.

‘Deep ecological awareness recognises the fundamental interdependence of all phenomena, and the fact that, as individuals, and socie 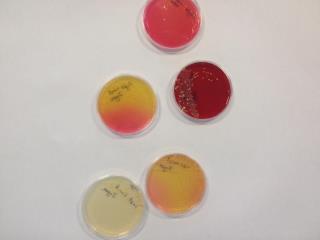 ties, we are all embedded in (and ultimately dependent on) the cyclical process of nature’ – Capra